Posted by animewarcrimetribunal on March 25, 2021
Posted in: Review. Leave a comment 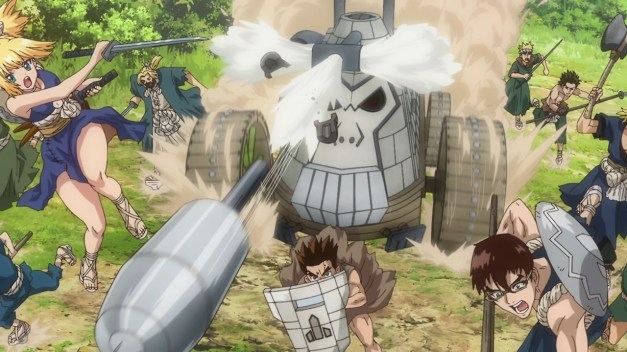 Oh boy, I’m just so tired of all these Stone Wars.

It’s hard to say anything about sequels like this without repeating yourself. Dr. Stone: Stone Wars was good in the same way the first season was. There’s no complicated reason behind it either, it’s just very entertaining. It really helps to have a main character like Senku. If he was just brilliant and good-intentioned with no other traits, he could’ve been very boring to watch. Within the story, he’s basically infallible. Making him kind of a dick adds some much-needed color, and makes him fun to follow even if he doesn’t necessarily develop much as a character. In fact, I’d say the whole cast is good, there’s basically nobody I dislike, including all the new characters introduced this season.

The only thing I could say Stone Wars was missing were those ‘science quests’ that drove the first season forward. Whether they had to develop antibiotics or create a telephone, there were multiple steps along the way with a focus on gathering materials or building equipment. There are still a few moments like that in season two, but they’re much more brief, generally just summarizing the process and using things they already had on hand. It’s understandable though, because time was in short supply and preparations were mostly finished by the end of the first season.

Regardless, because this season focused entirely on the titular Stone Wars, it still felt like a cohesive unit. The war never gets super serious, and maybe some will find the way the conflict gets resolved a little too convenient, but if you’ve already watched 24 episodes of Dr. Stone you probably know what kind of mood it’s going for. It’s extremely optimistic, and sometimes that’s nice too.