Posted by animewarcrimetribunal on June 8, 2020
Posted in: Rewatch. Leave a comment

Running out of things to say. Hopefully we’ll reach the end game soon and things will kick into a higher gear. 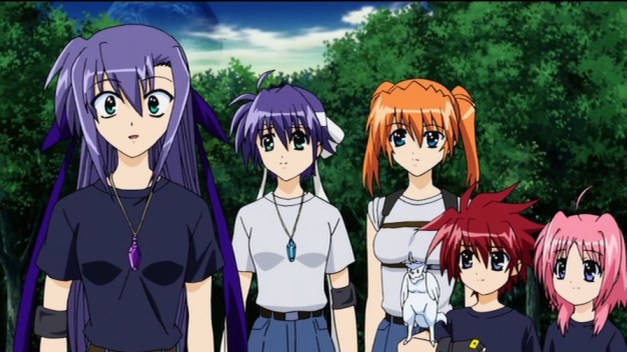 There’s absolutely nothing to talk about in these three episodes. Two of them are just fluff, and 16 is all setup for a big battle that’s going to happen in 17. It’s very obvious StrikerS did not have enough material for a 26 episode series, and as a result everything is sooo sloooow.

Thanks to some plot contrivances, the most powerful characters are all separated from their devices and unable to just do everything on their own, so the newbies will get to do something in this upcoming fight.

The most notable thing in these episodes was this screen at the end of episode 15. I assume the writers have seen other TV shows that do countdowns to some big event to build up the tension, but forgot how you’re supposed to use it. Literally the very next episode starts right before the press conference, meaning it just skipped right over these 7 days and nothing happened in the meantime. What even was the point?

Moribito is still moving forward at a slow pace. This should be the end of what is essentially a 10-episode long intermission. Both sides learn more about the spirit inside Chagum, that the official history is false and it’s a benevolent spirit, and that it must hatch to prevent a drought. In the process, Shuga discovers that the prince must still be alive and so the imperial hunters are now out searching for him. Meanwhile, Balsa is told that something known as an ‘egg-eater’ will come after the egg, and they’ll need to find some way to prevent this thing from killing Chagum. So now everyone is ready to start moving again, and I’m sure they’ll clash soon enough.

There’s not a lot more I can say about it at the moment. It’s one of those shows that’s engaging enough to keep watching, but not a lot more than that.

The end of Kotomi’s arc sure is something. Her parents were on a plane that crashed, right? Well, apparently while the plane was crashing her father emptied his briefcase, throwing out the only copy of their world-changing research paper, so he could put in a teddy bear he’d bought as a birthday present for Kotomi, and a note to please make sure it made its way to her somehow. Okay.  Sure. There’s a montage of a briefcase being passed from person to person, each repeating the contents of the note in various languages. Hilariously, the languages are in such an order it suggests the case just went back and forth between continents for a while. It finally makes its way back to her exactly on her birthday, and everything is good now.

The remaining two episodes deal with annoying high school drama. Oh nooo, we want to get this teacher as our club advisor, but so do these other girls! And there’s literally no one else who can be club advisor!

This other group is trying to form a choir club, because one of them was a violin prodigy until her career was prematurely destroyed by an injury, and now they’re trying to make a new club for her to have something else to focus on. Oh hey it’s basically the exact same backstory as Tomoya. It’s like poetry, it rhymes. But then it turns out that Sunohara also competed in a sport and had to quit because of an incident. What the hell? Why was that even necessary? The end result is that Tomoya, Sunohara and Kyou play a basketball match against the basketball club over the school advisor. I could summarize the reasoning behind this but just trust me that it doesn’t make sense. These episodes have mostly just been irritating, both because of the drama and because of the dumb jokes.