Another week passes, with few surprises.

This was a pretty good episode. The big battle wrapped up a bit faster than I was expecting, but that’s what happens when the army rolls in and starts blasting the vampires with tanks. Either way, the viewers get what they wanted, and Yuliy gets his revenge on Kershner. I wish the latter had been developed a bit more, though. He showed up regularly during the show but he was always just a generic evil vampire. Hell, he had to tell Yuliy that he was responsible for the Dogville massacre or else Yuliy wouldn’t even have cared about him.

It also turns out that Professor Willard was partially responsible for said massacre, by helping the vampires decipher a book about the Ark of Sirius. Of course he didn’t expect things to turn out the way they did, but he still feels guilty. He expects to pay for his involvement (and silence) with his life, but Yuliy stops himself in time. Despite his anger, he still thinks of Willard like a father.

And with that, Yuliy has moved beyond simply living for revenge. On his brother’s advice, as the last remaining Sirius, he’s looking for a new purpose: finding and protecting the Ark. The nature of the Ark is still a bit of a mystery. Willard just tells him it contains “wisdom and technologies”, which is pretty vague. What kind of technology? Why would it be kept hidden by a werewolf clan? Hopefully we’ll get some real answers soon.

Yiluy says goodbye to his friends and sets off by himself, while the others return to London. It’s only episode 7 though so I’m sure they’ll be back in two weeks.

Eh, it’s fine. Nothing wrong with this episode, but nothing exciting either, so I don’t have much to say. It’s all just building up to the big battle next week.

What a weird episode. The girl who acted like a huge bitch to Ayano earlier this season? She actually wants to be her friend and live with her and Uchika. Uh, okay? And so we get this tedious episode where Connie and Ayano hang out together so she can get her ~true feelings~ across. Ayano, meanwhile, is still flipping back and forth between cute and psycho.

It’s not just Connie’s personality shift that’s making it impossible to care about this stuff. I can chalk that up to poor adaptation. No, it’s the refusal to address why Uchika abandoned her daughter. We’ve only seen Ayano’s side of the story, and it doesn’t paint a pretty picture. The only charitable explanation I can think of is that she left the country for work, but even then there’s no way she would just ignore her daughter for the rest of her life. Unless she’s just an awful person. But then we get a flashback where she finds and adopts Connie, and she seems nice enough in that

In the same flashback, Connie finds out about Ayano’s existence. We never see her asking Uchika why she’s separated from her daughter, but surely she would’ve asked at some point? Maybe Uchika just refused to tell her anything, and that’s why Connie left by herself to go see her. That would again suggest she’s a terrible parent. But why leave it all up in the air like that unless there’s going to be a different explanation? I just can’t see what it could possibly be. Well, at least she shows up at Ayano’s home at the end of the episode, so I’m sure we’ll find out next week. I’m just worried it’s going to be stupid and melodramatic.

Meanwhile Nagisa continues to push herself beyond her limit. Her friend isn’t resolute enough to tell her to stop. If only the club had some kind of adult who supervises them and keeps them from doing harm to themselves. 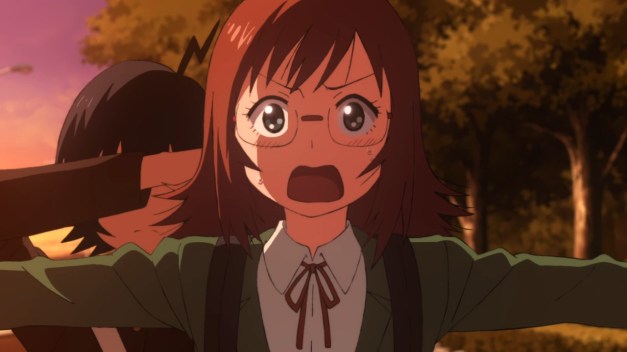 Planet With seems to be a collection of decent ideas with lacklustre execution. Nothing it tries to do really works, there’s always something off about it. This episode had two great examples of this.

The first is Benika’s backstory. Leaving aside the presentation (a monologue that apparently even the writers thought would be boring so they set it in a hot spring), it doesn’t convey her motivations well. She used to be a police officer, but one day the detective she’d admired was killed. The two of them cornered an armed suspect, a young boy, and this detective responded by raising his arms and walking towards him. This, of course, results in him getting shot and killed. I’m no expert, but I assume that the last thing you’d want to do in that situation is approach the person holding a gun and force him to react. Even if you’re holding up your hands it’s still a threatening gesture. In fact, right after getting shot he runs up and kicks the gun out of the kid’s hand, so I guess he was right to feel treatened.

Anyway, the boy would later say that when he picked up the gun he felt invincible. This causes Benika to hate the idea of people holding such power. Much later on, after seeing one of her Grand Paladin teammates go out of control, she decided would rather see humanity’s psychic powers sealed away. I mean, I get the idea behind her backstory. And it’s believable that a teenager would think he’s hot shit because he’s got a gun tucked under his belt, and that this would eventually lead to tragedy. But there’s no focus on the boy and his way of thinking beyond that one single line. The flashback scene never showed the kid thinking he’s invincible. Instead, he was frightened and backed into a corner. Surely there was a better way to get the point across?

The second thing that didn’t work was Soya’s refusal to fight. There’s a lot of things going on here. His thirst for revenge was sated when he defeated Takashi. The place where he used to live and everyone he used to know are gone, and he’s now living on a planet he has no connection to. And finally, he’s just a regular teenager, not a soldier. It makes sense that he would have second thoughts about fighting. But the way it’s handled is so strange. The only one that’s trying to get him to fight is the enemy. Everyone else is just like “yeah you don’t want to fight makes sense”. Hideo shows up and goes off to beat the monster for him. Soya’s refusal to fight doesn’t actually lead to any drama. It also made me realize I’m not even sure how long he’s been on earth for. Back in episode 1 he’d already been going to school for a while. Yeah his original home is gone but it’s not like he has zero connection to Earth, and wouldn’t care if everyone he knew got turned into zombies. It also reminded me of how weak Soya’s motivation has been too. After 8 episodes, his only reason to fight has been revenge, against a group of people who weren’t really doing much wrong other than using the same kind of power that destroyed his home planet.

But we don’t get too much time to dwell on this, because Soya is once again approached by the People of Plot Exposition. They tell him that the dragon is still alive, on the far side of the moon, and when he wakes up they want Soya to defeat him. Uhm… why? Also it’s super convenient that just as Soya has lost the will to fight because he already defeated the dragon, it turns out to be still alive.

Finally I just want to highlight just how annoying Shiraishi has been as a character. Her role in the story is to do whatever’s convenient. First she was mysteriously aiding the paladins. Why? Uhh… because the sealing faction wants the earthlings to put up a real fight. That doesn’t even make sense. Isn’t their aim is to preserve peace in the galaxy? Then she shapeshifts into a high schooler to interfere with Soya and Nozomi. Why? Uhh… because she just doesn’t like people being happy. It’s all just random forced drama.

What a letdown after last week. I thought the future would be crazy, but instead it’s kind of dull and uninteresting. The strangest thing in the entire episode is how the ‘darkest’ part of the story also has the most boob jokes. Running away from armed soldiers? Let’s explicitly show how the unconscious girl you’re trying to save has her breasts pressing against your back, and then have the other girl act jealous. Trying to stab someone to death? Take a break to get really upset that he touched your breast.

We’re in the future (presumably), back with Setsuna and the rest of the cast. What, you thought we’d have an episode without all the girls? Rinne, Sara and Karen act pretty much exactly the same as their past selves. I don’t know if we’ll ever get a real explanation why these characters are the same in every generation, or if it’s just destiny.

The future is some kind of dystopia where time is running out for humanity and the church is forcefully repressing revolts, but it’s hard to get into this entirely new setting that we’ve never seen before, so I’m not even going to summarize it. It’s trying to be serious, but it’s also throwing in all this harem nonsense so the tone is all wrong. Karen also fights off a bunch of soldiers with rifles using just throwing knives, which as we all know are far more accurate than guns.

At the end, Setsuna proclaims that he will save the island. How? Dunno. Maybe the stasis machine has a reverse setting.