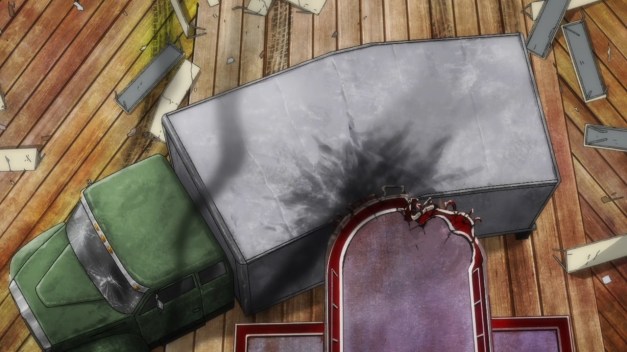 We’re about a third of the way into the season, and most shows seem to have settled into their comfort zone by now. Too bad that zone is pretty far down. At this point I’d be extremely surprised if anything ends up being more than “Eh, it’s all right”.

Yep, still enjoying the show. It’s not great, but it’s good enough. There’s just not a lot to say about the story.

The action was a little easier to follow than last week, probably because it was a smaller-scale battle. There’s still one issue though: it never makes me feel like the main characters are in any danger. They’re all superhuman badasses who can dodge a rain of arrows and single-handedly strike down half a dozen soldiers with ease. But the Japanese side is supposed to be at a serious disadvantage, outnumbered by the Mongol invaders and having to rely on their wits. This is also reflected in the context of this particular battle: it’s a surprise night raid that isn’t intended to inflict serious damage but to strike fear into the enemy and put them on edge. Yet as soon as the battle begins the protagonists look overwhelmingly stronger and you’re wondering why they don’t destroy the entire Mongol army right there (the answer, of course, is that they too have a superhuman badass). I dunno, I just think the story would’ve benefited from more realistic combat. But the show is just fine, and that’s apparently the best we’re gonna get this season.

A remarkably dull episode. There’s some stuff happening between the vampires, the Hyakko Party, and the Alma Company, but it’s not particularly interesting. It’s mostly just setup for things that will happen later, as it looks like we’ll have another clash with vampires next week (including Yuliy’s brother). Meanwhile Ryoko is still constantly chasing after Yuliy without really doing anything.

I can’t quite get a fix on this show yet. Sometimes it’s the best thing airing this season, and sometimes I’m bored and waiting for something to happen. It’s fortunate for Jaeger that nothing else is impressing me either, so it’s still at number 2.

This episode was weirdly goofy and lighthearted. Sure it might seem in poor taste to have a discussion about a child sex slave trafficking ring sandwiched in between wacky comedy and Hollywood action movie scenes, but at least we went almost an entire episode without someone threatening to rape Ash. That’s something.

At the moment, Ash’s burning desire to get revenge on Dino and Arthur is one of the few things in the story I can actually relate to, so I’m glad we got back to that. As soon as Ash gets out of prison, he makes a plan to take down Dino. How? Well… by riding on top of a speeding truck and shooting him from there. Seriously? That’s the best plan you could come up with? Shockingly it doesn’t succeed. Dino gets shot in the shoulder, but survives. The only thing that using the truck seems to have accomplished was making it easier for Ash to get shot as well.

Silly as it was, most of this episode was all right. There’s just one problem: I really can’t deal with Eiji. He has no business being involved in any of this. He even acknowledges that he has nothing to offer Ash. But nonetheless, he puts everyone at risk by helping Ash escape from the police, and then gets actively involved in the shootout later on. Why is he doing this? Just to make himself feel better, really. He “feels responsible” and wants to help, but at best he did nothing, and at worst he put both himself and Ash at risk of getting killed. And yet no one seems to blame him, or tell him that he’s an idiot getting in way over his head. I’m sure he’ll eventually get a reality check, but that’s going to be way too late for me.

Also, I’m still confused what this whole “Banana Fish” thing is all about. From the first time we heard the term, it’s always seemed most likely that “Banana Fish” was just the name of the drug. It was only last episode that it raised the possibility that it was instead the alias of the person who made it. But now Dino tells Arthur that it’s not the person, but the name of the drug after all. Is that supposed to be a revelation? Is it supposed to just confirm what the viewer already knew? Then why the brief misdirection about it being a person? As I commented last week, none of this is significant or interesting. It doesn’t matter whose name it is, because it doesn’t affect anything. When Ash and Max are wondering what Banana Fish is, they’re not concerned about who or what the label applies to, they want to know who created the drug and why. 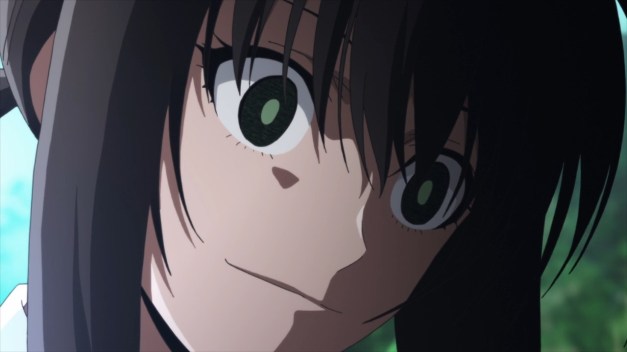 Jesus christ, are there no brakes on this drama train? All right, let’s start with the positives. The action still looks great. It’s been a while since we got a real match, and it’s easily the best part of the episode. There’s just enough commentary from the coach to understand what’s going on, but not so much that it becomes a tedious play-by-play narration.

But the drama. Dear god, the drama. We’re still dealing with Connie and Ayano, and it looks like that’s not going to end any time soon. Ayano’s side almost makes a comeback, but at the last moment Connie’s teammate steps in to seal their win. Now neither side is happy. Ayano wanted to win, and Connie wanted to win on her own. Why didn’t Connie just demand a one-versus-one match against her from the start? It’s not like her team ever says ‘no’ to her by the looks of it.

Afterwards, Ayano starts muttering some excuses because she can’t accept her defeat. She felt like she had to win this match in order to become part of the team. Okay, I can sort of see how she would feel that way because her mom was an awful person who instilled that sentiment in her, but this whole childhood trauma is a bit too much. She then runs off, while the coach and team manager do fuck all.

Everyone is now very sad, but Sora helps bring Ayano back by telling her she used to hate her but now she thinks she might be okay. Thanks, Background Character #3. Suddenly we cut to a wacky bath scene that serves no purpose except fanservice. Talk about tonal whiplash. We end with Connie telling Ayano that nothing matters in life other than proving yourself to your mom. Glad to see the mom managed to fuck up not just one but two kids in her career. Later in the bus home Ayano says “Forget mom, I don’t need her anymore”. You’d think that would be a good thing. I mean, she doesn’t need her mom. Her mom abandoned her and she’s better off without her. But we’re led to believe it’s not a good thing because Ayano has crazy eyes and a creepy smile when she says it, and the most bizarre violin horror music plays during this whole scene.

Well, I think the tone has been set, and it’s not looking good. I expect that the stuff with Connie and Ayano’s mom will end up consuming most of the season. Hanebad is now roughly on the same level as Banana Fish for me, where it’s okay but not good. The sad thing is that it had so much more potential, and it didn’t even need to try very hard to be better than this.

Haru wants a rematch against Soya, even though she got crushed last time and does not seem to have any plan. But this time, she loses control of herself and her mech turns into a giant dragon, the same type that ended up destroying Sora’s home world. Now Soya and the paladins have to join forces to take her down. I guess this is supposed to be a major development, but since the two sides never had that good a reason to fight each other in the first place it didn’t feel particularly special. We also find out that the boss of the paladins intends to use their powers to take over the world. Ehhh.

Planet With has been languishing at the bottom of the pack this whole time, and I’m not seeing any reason to expect better. And yet, there’s still a chance that it will shift into a higher gear and become actually interesting. Any time now… 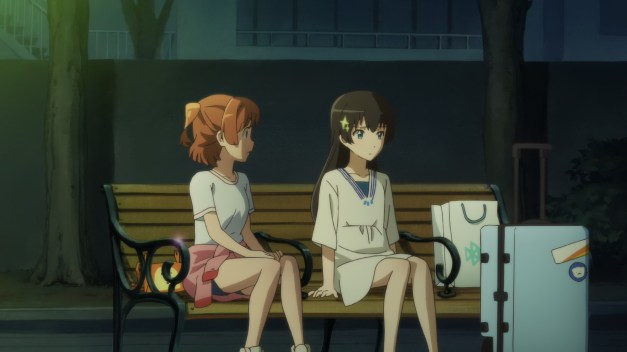 Wow, I don’t care at all. Dropped.

This episode starts off really boring, but goes straight to 11 midway through. Nothing interesting happens in the first half, although for some reason this hyper-rushed adaptation needed to make time for a scene with Sara giving Kuon a butt massage, complete with exaggerated moaning. I thought Kuon spent all day in a dark room because of her sunlight allergy, but apparently it’s fine for her to be out in the living room in the middle of the day? And she has no problem talking to people? So why did she hide in her room passing notes under the door in episode 1? Just so it’d look more mysterious?

But then it moves on with a lame montage of Sara going around helping people. And just when you’ve almost nodded off, she reveals that she’s actually her own mother. Sorry, what? She’s convinced that before her 17th birthday, two days from now, she will travel back in time to… conceive herself. The bigger shock is that Sara is supposed to be 17. As far as I can tell, the only evidence is that her mom looks exactly like her and even has an identical birthmark on her chest. It’s not explained why this has to happen before her 17th birthday. It’s also not explained why she would be a clone of her mother even if she did go back in time. Did… her father not contribute any genes?

Anyway, while your mind is still reeling from this bizarre plot bomb, we get the double twist. It’s not actually true! Why did she look identical to her mom, then? It’s a coincidence. What about that birthmark, then? Oh, that’s actually a brand that all successors of the family line receive at birth. Why didn’t she know about this? Dunno.

But I just skipped over another strange plot twist. Sara believed she was a child blessed by god, because after her birth, no more children were born with soot blight syndrome. Sadly, when she was ten years old, her parents died in a fire that consumed the temple, and the disease returned at the same rate as before. Her reason for wanting to go back in time is to not only give birth to herself, but also to prevent that fire and stop the disease from coming back. But Rinne discovers the truth of the Garandou family. It was right there in a book labeled “Truth of the Garandou family”. No seriously, that’s what it says.

Turns out there was no blessing involved. Instead, after Sara’s birth, her uncle started disappearing all the babies that showed signs of developing soot blight in the future, and telling the parents that the child was stillborn. Apparently, no one noticed that the rate of stillborn infants skyrocketed at the same time soot blight vanished. And that the inverse happened ten years later. Nothing suspicious there at all. But hey, we fixed Sara’s issues. On to the next girl.

Who knew that if you took a boring-looking VN and rushed through it at breakneck pace, you’d get such an entertaining trainwreck?