Posted by animewarcrimetribunal on July 7, 2018
Posted in: First Episode Impressions. Leave a comment

The second batch of new shows is out. It’s this time again.

Amnesiac boy lives together with a maid and a cat-man. He thinks his family is dead, but he can’t remember what happened. While he’s at school, a flying bear… thing… appears over the ocean and, surprise surprise, it can’t be harmed by regular weapons. A group of people show up, summon robots, and fight the thing. So far, pretty standard. We immediately get some backstory of one of the pilots, as he’s temporary lost in a dream world. Apparently his mother died in a fire, so he became a fireman when he grew up. In the dream he does the one thing he always wished he could’ve done, and saves his mother from the fire. They share a heartfelt moment, but this all comes off as a little weird because this guy only just appeared and suddenly we’re already wrapping up his character arc. Anyway, the twist comes as our main character receives a call from his maid, and it turns out they want him to fight as well. Not against the monster, but against the ‘heroes’.

Meanwhile the heroes have split up, so they find the firefighter guy by himself. Boy is swallowed by the cat, who turns into a robot, and beats the hero. After taking a vial that’s supposedly the source of their power, he suddenly remembers something important and declares he’s coming to beat the crap out of all of them. What did he remember? I guess we’ll find out next week.

This show is a mixed bag. Half of it is anime-by-the-numbers, but then the other half is weird off-the-wall random stuff. But then some of the random parts are also random in a cliched way (oh look he lives with a cutesy yet sinister maid). On the other hand, the hallucination scene was actually pretty well done and I’m vaguely interested in knowing how the pieces fit together.

Watchability: Maybe? It’s clearly going to take another episode to find out what the actual plot of the show is, so I guess I’ll stay around for that long at least.

It’s pretty hard to say anything about a comedy. Either it works or it doesn’t, and Chio didn’t work for me. There were some decent punchlines in there, but every joke was so belabored that by the time we got there I was already begging for them to move on. I would’ve probably appreciated it more if they cut all the chaff and turned it into a fast-paced 5 minute short.

Watchability: Even if it gets better it probably still wouldn’t make the cut.

I gotta admit, compared to what usually passes for Japanese horror, being chased by a crazy scythe murderer is actually frightening. Too bad that whenever he opens his mouth he sounds like an adolescent edgelord and all the tension disappears.

A poor girl called Rachel went to a hospital one day and instead found herself in a basement full of psychopaths, marked as a sacrifice. She apparently has some screws loose herself, though. After a bird got cut up and lost more than its body weight in blood, she decided the best course of action was to sew it back together.

The presentation of the show really isn’t too bad. If it had any restraint at all it could’ve probably managed to be creepy. Instead it’s trying too hard, way too hard. It’s not just reaper boy either, she also meets a doctor who makes goofy faces and is just so goddamn crazy.

It looks like Rachel inadvertedly has to team up with the reaper to get out alive. Maybe he gets less annoying when he’s not trying to scare her, but I’m not getting my hopes up.

Watchability: It’s dumb, but not funny-dumb. There’s other shows this season with more potential in that area. 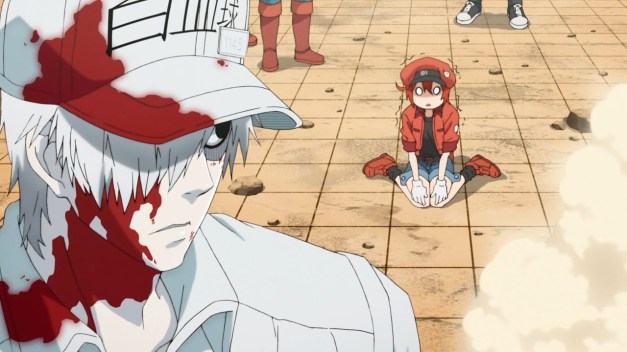 Anthopormoric human cells having wacky adventures. It’s not especially educational but it’s surprisingly charming. Okay, the main joke (clumsy red blood cell keeps getting lost) started wearing thin before the first episode was over, but there’s other angles to explore so I’ll give her a fair chance. Overall, it’s all right. It’s not making me laugh out loud, but it’s entertaining enough.

Watchability: Has a very high chance of falling through the cracks, but it looks like slim pickings this season so I may end up sticking with it.