Posted by animewarcrimetribunal on November 6, 2015
Posted in: Episode Roundup. Leave a comment

This might be the last update of the season, since shows are dropping like flies now and there’s little point in having a ranking for three shows. Besides, it might be more fun to watch good anime, but it’s much more fun to write about bad anime, and my patience has finally run out with all the trash of this season.

A nice action episode. It had some good moments, and enough tension to keep me interested. Kind of wraps up the current mini-arc, so we’ll have to see what the next conflict will be. 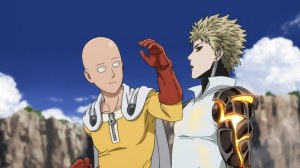 Kind of a slow episode. Not much action, and it wasn’t that funny (not unfunny, it just didn’t have many jokes). But it’s meaningful setup for the rest of the show, so it’s fine.

Keep watching? For sure.

This week brings less detective work and more pretentious dialogue. Yeah, the story seems to be fairly intelligent, but not as intelligent as it thinks it is.

Swing and miss. I want to like the show, but it just doesn’t work. All the problems I’ve mentioned before are still there, but this time it tried to be a little more forthright and it just fell flat. I think it banks too much on the viewer automatically being invested in the whole superhumans vs monsters struggle. I can see what they’re doing, I just don’t care about it.

Keep watching? No. I gave it a fair chance, but it hasn’t lived up to its potential.

To the show’s credit, the actual plot of this two-parter turned out to be fine. But it was not, by any stretch of the imagination, enough material for two episodes. It could’ve been a single episode, and even then it would’ve just been “all right”.

Keep watching? I’d have to be really bored.

This episode was… okay? It’s easily the best one so far, it’s just that… doesn’t say a lot. I don’t know if it’s a coincidence that the best episode is the one that doesn’t have Hazama doing the operation.

The joke is starting to wear thin. Its saving grace is being just five minutes long.

Turns out it’s just a vehicle for moe bullshit after all. One weak episode is an outlier, two is a pattern. Nothing meaningful happened except for introducing yet another girl. I liked the initial core cast, but now it’s just being padded with more and more generic harem fodder.

Keep watching? No. I tried to be optimistic, but it just sucks. 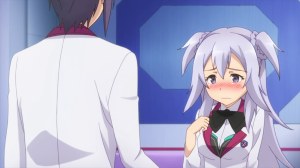 I kept watching Asterisk largely to compare it to Cavalry, but now that I’m dropping the latter, there’s little point in watching more of the former. Thankfully Asterisk was also really boring and lame this week, so nothing of value was lost. I stopped watching when Ayato ran into some moeblob, and the rest of the episode seemed to be about protecting her smile.

Hey, remember all the things I complained about last week? Yeah, they’re gone now. Everything got resolved in between episodes. No really, last week everyone in the school was eagerly calling for Ikki’s death, but now he’s wildly popular and has a group of fangirls. From one extreme to the other. There’s even a group of bullies that try to rough him up (with axes and guns) but Ikki defeats them with ease and they admit that they were just jealous of him. Of course, since Ikki is so nice and awesome and special.

Then there’s some moronic plot about Ikki and Stella because they’ve been together for two weeks and nothing has actually changed, but who gives a shit. All the bad stuff that made me keep watching this show have vanished, and there’s nothing’s left to care about. Just a fighting tournament.

Keep watching? No. The magic is gone.